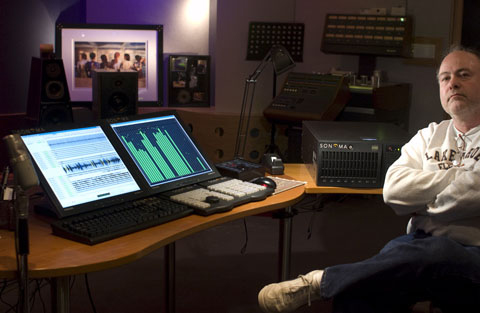 Every time I meet a true audiophile, I love to ask them this little bit of trivia that I picked up somewhere along the way. Of all the people I’ve ever asked it to, Gus Skinas is the only one to have answered it correctly, without hesitation. And, it wasn’t a lucky guess.

The question is this: Why did the CD end up being 80 minutes long? “Beethoven in the car,” Skinas shot back when I asked him. Yes! When Sony was developing the compact disc, an executive pushed for the 80 minute length because it was his goal to listen to Beethoven’s 9th in the car, without interruption.

Skinas knew the answer so easily because he was there when Sony Pro Audio was still a three or four person operation, working on very early digital audio way before the compact disc came out. He was also there several years later when Sony unveiled to the press the first-ever CD mockup (which was the Bee Gees’ Living Eyes, for the record) — a CD that even had “grooves” on it where you could pick up and place the laser on the next track, much like you would vinyl on a turntable. He also saw the very first CD ever made, which was printed on glass without grooves.

Fast forward more than 20 years and Skinas is now in the position, as president of Super Audio Center in Boulder, of trying to push a technology that he helped develop that makes better sounding digital recordings. That technology is known as the Sonoma System — a multi-track recorder/editor which replaces the warmth of analog that is typically lost in current digital recordings.

Essentially, Skinas has helped to develop a computer that sounds like an analog tape recorder — and in doing so, he’s trying to help right the wrongs that were made by himself, and the industry, in the early days of digital audio, when quality was passed over for the convenience of the format. The process is an uphill battle for Skinas, as most major labels have yet to embrace SACD (super audio CD) and the DSD (direct-stream digital) format, and consumers have also passed over the quality of the format in lieu of free, or cheap, lower quality downloads.

Marquee: What was the first concert you ever attended?
Skinas: Elton John at The Electric Factory in Philadelphia in 1970 … That’s what made me want to get into this business — that night.

Marquee: What was the first album you ever owned?
Skinas: Switched on Bach by Walter Carlos. I was big into synthesizers.

Marquee: What was your first job in the industry?
Skinas: While I was still in school at the Institute of Audio Research in New York City I got a job working with Ed Kalehoff. But I got fired after three days for being messy. Later on I got a job as an apprentice of Secret Sound Studio in New York, which was owned by Todd Rundgren.

Marquee: Were you engineering then?
Skinas: I did some engineering, but mostly I was the technical person there.

Marquee: So you helped develop digital audio technology from the early days and, obviously, it’s given the world some amazing benefits, but there’s also been some drawbacks. That’s what your Sonoma System is trying to fix, right?
Skinas: Sort of. There were a lot of advantages back in the analog days — the warmth and emotion you got from music. And the Sonoma System gives you that emotional connection again. It’s probably a point that is very subtle, when somebody like a record company executive says that the difference isn’t that big. They both sound good, but this sounds a little better. But to me, one is right and one is wrong. The right one is the one you get the emotion from and the wrong one is the one that kind of pushes you away, which is what I feel digital does.

Marquee: But, when you were working on digital audio in the early days you believed in what you were doing and now you say it’s kind of wrong?
Skinas: Yeah. Then, I thought it was the coolest thing in the world. There was no noise and flutter, every time you copied it it was exactly the same. This is the future. We all thought that at the time. And I don’t think I have, and never thought I had, golden ears and obviously I didn’t because I didn’t hear the problems with it back then, but there was something about it we didn’t like and it took a long time for me to figure out what that was.

Marquee: So, in simple terms what is the Sonoma System?
Skinas: It’s a computer that sounds like an analog tape recorder. It uses a completely new one-bit sigma delta technology for recording music in a computer— different than PCM — that has the character of what analog tape sounds like. I’m convinced that digital music has distortions in the spatial time domain. This fixes that. It may not be something you can easily measure, but it’s something that the brain says, “This isn’t quite right.”

Marquee: You’re convinced, but the industry really isn’t yet, right?
Skinas: Yes. And that’s the big worry. That if I don’t pull this off, we’re going to go backwards, or go to the status quo and instead of quality getting better and better it’s going to get worse. The problem is that I don’t think that quality is an issue to record company management, except for the labels that make a living on it, like Telarc. The big labels make more money from ringtones and Guitar Hero than they do with pressed discs. This technology is a golden opportunity to actually make some money with something of better quality. It’s not a matter of business for me, it’s a matter of losing an opportunity to do it the right way and fix what we broke.